One of the hardworking sports show hosts in Northern Ghana, Abdulai Shaibu known in his field of play as Shaibu Terry has averted his anger on the head coach for Tamale’s oldest traditional club, Real Tamale United’s Shaibu Ibrahim Tanko over what he described as an outmoded style of play by the coach. 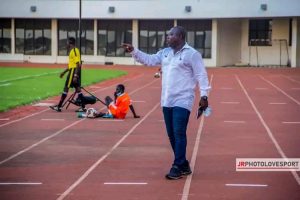 He also went ahead to accuse the head coach of the club of only registering players that he brought from various institutions to the club and giving them playing time even if they aren’t performing.

READ ALSO:  LEGON CITIES FC SEND A STRONG WORD OF CAUTION TO RTU AHEAD OF THEIR PREMIER LEAGUE CLASH.

His comments came shortly after the club failed to secure a full 3 points against Bechem United at the Aliu Mahama sports stadium in Tamale to which he believes the head coach of the club was the ultimate cause.

The Monday night sports show host aired on Tamale-based Bishara Radio, Shaibu Terry took to his Facebook handle to share his disappointment with what happened at the stadium today.

RTU is currently hovering around the relegation zone in Ghana’s premier league table.
Check out his post below:

RTU SLOWLY JAMS TO THE TUNE OF RELEGATION IN THE GHANA PREMIER LEAGUE.

Tamale-based football club, Real Tamale United (RTU), is slowly dancing to the tune of relegation in the Ghana Premier League after 32 successive matches played. The North Stars are currently ranked sixteenth (16) in the […]

FANCY GADAM TO CELEBRATE CHRISTMAS WITH FANS IN ACCRA AT THE BOKUM BOXING ARENA.

Iceberg Slim Out To Correct Misconceptions About Him

I TRULY REGRET COMING OUT FOR THIS CONCERT – BLUEBEATZ CRIES.