Reports reaching Northern Entertainment Filla has it that some players and management of Tamale based football club Real Tamale United(RTU) in the division One league were allegedly pelted with stones by supporters of Nsoatreman fc ,at Nsoatreman following their match day 6 game which ended 1-1 draw on Sunday 7th February 2021.

The alleged act by supporters of Nsoatreman Fc is highly condemnable,archaic and gross stupid which must not be condone in our modern football.

It is our fervent hope that management of Real Tamale United(RTU)  will issue a formal complaint to Ghana Football Association(GFA) for appropriate sanctions to be taken against this act of barbarism and hooliganism.

READ ALSO:  RTU SLOWLY JAMS TO THE TUNE OF RELEGATION IN THE GHANA PREMIER LEAGUE. 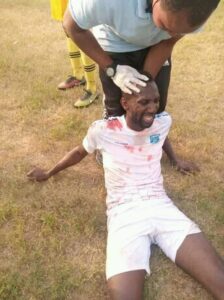 The Tamale-based premier league club, Real Tamale United, has officially confirmed Coach Baba Nuhu Mallam’s appointment as the club’s head coach for the upcoming season by the Board. The former Technical Director of Utrecht football […]

One of the hardworking sports show hosts in Northern Ghana, Abdulai Shaibu known in his field of play as Shaibu Terry has averted his anger on the head coach for Tamale’s oldest traditional club, Real […]