Before his official exit he was the host of the most listened to weekend entertainment program aired on Gbangu FM dubbed “E – 360 Show”, Reasons for his exit are still yet unknown but Sources close to the presenter have it that he is moving to another station which wasn’t made known to us on phone.

READ ALSO:  Mr Tell Shares His view on Chop the mic program and some of the challenges they face

Below is a copy of his resignation letter: 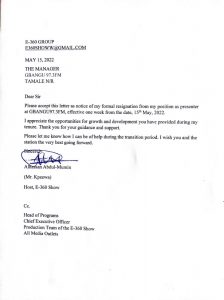 Maccasio Shames Ataaka With The Inclusion Of Don Dee On His Throne Concert.

Organizers for the upcoming Throne Concert have decided to listen to the 69 music King, Sherif Abdul Majeed known widely as Maccasio request to have Don Dee on the concert. Even though Don Dee’s name […]