Nigerian singer Burna Boy has, on August 8, 2019, received an appreciation message from the Recording Academy – the organisers of prestigious Grammy Awards.

The applause is coming after Burna Boy dropped his acclaimed studio album, titled ‘African Giant’. The album features world music heads, who also contributed to the album’s uniqueness, made it a standard and world-class musical project.

The tweet reads: “Burna Boy is steadily ascending as a globally-loved superstar, with his smooth, rich vocals and infectious beats that blend traditional Afrobeat, dancehall, hip-hop, trap, and more.”

Year 2019 has been very awesome for the hardworking singer, Burna Boy. Earlier this year, he delivered his debut performance at the Coachella festival, alongside Nigerian superstar Mr. Eazi, making them, two of the few performers from the continent of Africa. 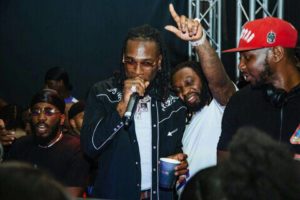 The ‘Dangote’ singer proceeded to receive the ‘Best International Act’ at the recently held BET Awards 2019, an evidence that Burna Boy is indeed hardworking and his craft is being appreciated in the international scene.

Burna Boy also featured on American singer and arguably the biggest female singer in the world, Beyonce’s latest album, ‘The Lion King: The Gift’, on a track dubbed ‘Ja Ra E’. Burna Boy was among the six Nigerians featured on the star-studded body of amazing songs.

It is no news that 2019 has been an amazing year for Nigerian music star Burna Boy aka the African Giant. As the music star bagged numerous awards and got a Grammy nomination. A fan […]

The 2019 edition of the Ghana Music Awards UK was successfully launched Yesterday At the Accra City Hotel. Nefgh.com brings to you the official list of nominations for this year’s edition which has in it […]

Award Winning Superstar Ahmed Mujahid Bello, widely known in the world of entertainment as Fancy Gadam  has recently joined the bandwagon of African musicians to condem the recent xenophobic attacks in South Africa. The Total […]

I Will Beat You Like My Own Child Whenever You Step Foot Into My Zone. Rastony to IsHassan Dablee.

Davido Set To Drop Another Song with Chris Brown.