In a world that many have been deceived by social media and the posts uploaded by celebrities, Nigerian singer David Adedeji Adeleke, better known by his stage name as Davido has taken to his Official Twitter page to dish out a piece of advice to his over a million followers.

According to the DMW boss, people need not be carried away by what they see as they are in fact doing well, even if social media does not make it seem so.

Below is what Davido posted:

“Don’t be fooled by what you see … you’re doing so much better than u think!” 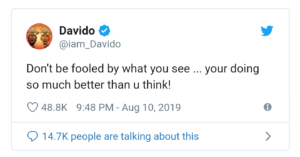 Davido Set To Drop Another Song with Chris Brown.

Davido has just announced that there is another song from him and Chris Brown to be released next week. This announcement was made on Friday, 26th of September via Social Media Handle by the afrobeats […]

Nigerian singer, David Adeleke, professionally known as Davido in the world of Showbiz appears to have gotten involved in an accident as new photos which have since gone viral on social media, show the singer […]