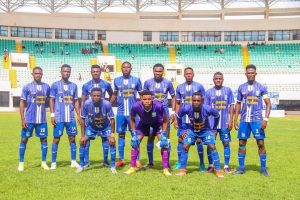 The club started the 2021/22 season so well after gaining promotion into the Ghanaian top-flight football league eight (8) years after they suffered a shocking relegation in the 2012/13 season and the club’s fight to get back to the top flight football woes started from then. They were in second-tier football until last season when they gained an incredible promotion which won them the hearts of many people in the northern part of the country, specifically Tamale. Fans began to give their support and attention to the team during the campaign and have shown that in the current and ongoing season.
The Northern Pride club’s struggles and woes for the season started when they had to
lose their star man, David Abanga, to the Black Stars ahead of the African Nations tournament 2021 in Cameroon. He gained a call-up into the senior team after his incredible start to the season, which saw him score lots of very important goals for the club, but injury soon set in for the fired-up young man during the Black Stars’ training session in Cameroon ahead of their second group game against Gabon. 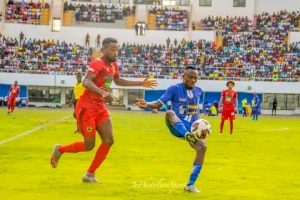 RTU started to fall with so many controversial issues around the club, fans, and the management board. It started with the issue of gate proceeds after every home game. Management was unable or reluctant to account for the money generated.

They also had to continue the league without their most valuable and highest-paid player when he was sidelined for treatment for three (3) months and saw his goal-scoring chart beaten by Kotoko’s Frank Etouga. It was a very sad moment for both Shaibu Tanko known by fans as “Off The Road”, the management and the fans were worried about missing such a player for this long, which affected the clubs’ performances and results. Started losing worthily away from home and slipping to so many draws at home in most of their games. Fans started to get frustrated and angry, questioning the coach’s tactics, performance in terms of results, and how management could not be stable financially to run the affairs of the club after raising a sum of 3 billion Ghana cedis during their coronation match against Steadfast FC at the Aliu Mahama Sports Stadium. Honouring games away from home turned out to be the norm and a worry for management because there were no funds or money available.
A group of frustrated and angry fans and supporters stormed the clubs’ training grounds to take away the clubs’ training kits and materials as a protest to raise their grievances. It was said to be taken to the regional minister’s house, who happens to be the patron of the club. The fans made known to the patron their reasons and concerns for their actions and asked the current management to step down or resign. Their grievances were assured by the minister that they would be looked into and resolved. 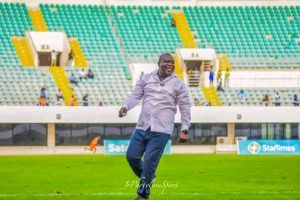 The public relations officer (PRO) for the club, Mr. Sey Mubarik, attributed the poor performances of the players to a lack of funding, which could have been used to settle the players’ payment arrears and bonuses to boost their morale to enable them to perform to their very best and play their hearts out for the badge of the club.
It had to take the courage and sympathy of Mr. Ibrahim Mahama, brother of former president John Dramani Mahama, to come in to settle all three (3) months’ salaries and bonuses of the players to continue the season after they complained of not being paid for so many months. Reliable sources say Mr. Ibrahim Mahama wanted the club sold out and handed to him so he could manage the affairs of the club financially, but the management board was very reluctant to listen to him and denied him that opportunity, which has since seen him set back in the affairs of the club. Vice president Dr. Mahamud Bawumia and the regional minister came in to help secure funds, as they have always done for them during their league promotion season. They made available money for the club to honor games away from home just to keep the club at the top, but management has seemed unable to do so rightfully.
Mr. Sey Mubarik, the (PRO) comments came shortly after the club lost valuable points to their relegation-battling rivals, Eleven Wonders, at home in a goalless draw and also lost heavily to Karela United away from home in a six-goal thriller before heading into their last two matches in the league, slipping into the relegation zone and 16th position with a point behind rivals Eleven Wonders. Things look more complicated now going into the last two fixtures for the pride of the north. They will play a very determined side, Alhaji Grusah’s King Faisal, at home before going away to battle it out with last season’s champions, Hearts of Oak, in Accra. The Northern Pride boys will need to be at their very best like never before and will hope for a miracle elsewhere in other matches.
The Ghana Premier League has been tagged with an image of
game fixing and match manipulation either by officials or team managers, which the GFA president, Mr. Kurt Okraku, and the GFA ethics committee have been trying to fight and curb recently after what happened between Ashanti Gold and Inter Allies FC last season.
Ghanaian fans who follow the league and people in the diaspora will be interested to see how our league will end this time around after the GFA placed sanctions on the culprits of last season, which saw clubs heavily fined and demoted to third-tier football in the country and players banned accordingly.
RTU will be hoping to survive the hardest hurdle because their city rivals, Tamale City FC, are doing so well in the ongoing division one zone one league and are battling to gain promotion in a tough contest against Nsoatrenan FC, which could see them play playoffs on neutral ground and one time decided game if both teams win their final matches.
The City of Tamale and Techiman are going to be in a serious contest in prayers with God to seek mercy and favor to survive relegation, but it could all go down to the final day of the season. It’s going to be interesting and dramatic, but it should be entertaining and joyful to watch these two sides in the league. The integrity of the game should be respected so fans will be able to enjoy these games without interference and panic. Good luck to the best teams for the remaining matches. May God bless our homeland, Ghana, and make us great and strong.
All copyrights are reserved.

READ ALSO:  LEGON CITIES FC SEND A STRONG WORD OF CAUTION TO RTU AHEAD OF THEIR PREMIER LEAGUE CLASH.

One of the hardworking sports show hosts in Northern Ghana, Abdulai Shaibu known in his field of play as Shaibu Terry has averted his anger on the head coach for Tamale’s oldest traditional club, Real […]

I Heard Stonebwoy Is A Wife Beater – MzGee