Victoria Lebene Mekpah is a Ghanaian actress and a photo model,

Who recently tied the knot with media personality, Eugene Osafo Nkansah, a producer at Peace FM and owner of an entertainment blog named Nkonkonsa.

which saw several celebrities in attendance with the exception of Kofi Adjorlolo.

When rumors of the said wedding went viral, many people believed that the marriage between the two was planned after Victoria Lebene realized she was pregnant and didn’t want to be trolled like other celebrities who gave birth out of wedlocks.

The actress who is yet to comment on the alleged pregnancy has shared a new picture on social media and people are now left to decide if whether she is pregnant as reported or not.

After posting the beautiful photo, the actress wrote: “Blessings come in many forms, but a man honours his woman before the next blessing.”

“Blessed are those who heed to the words of the lord before breaking the rules in holy matrimony. Only 1 man seeth what the lot does not see! #Godsservant,”. 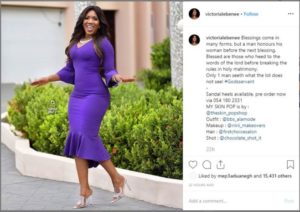 Making Music Is About Contribution And Not Competition – Okyeame Kwame to fellow Musicians.