Abdul Rahim Abdallah known in the world of showbiz as IsRahim finally reunite with the 69 Music Boss few days to his Throne Concert.

The Galbi hitmaker, IsRahim, is one of the musical sons of the Gadam Nation music president, Fancy Gadam. meanwhile,  there has been a very strong music rivalry between the two camps for some years now.

Yet, IsRahim felt the need to indirectly give out his support to Maccasio by sharing his upcoming Throne Flyer on his social media handle and further appealed to his followers to buy the advance tickets for the Concert which is slated for the 21St August.

The post went viral and fans tagged the Gulma hitmaker in the comment session of the post.
Maccasio, upon seeing the post, jokingly left. this comment below:
“I will not cane you again, now you can come to the place for some blessings”

READ ALSO:  No Ghanaian Artist Sing And Dance Better Than Me Not Even Fancy Gadam – Mr Drew Brags 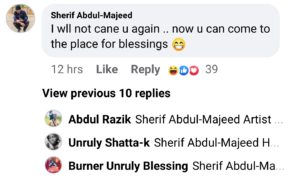 Multiple Award Winning Music Star,Maccasio under the Zola Music comes through with this hot banger dubbed “WARNING“.The latest song which is filled with hot punchlines was mixed by Flamez. READ ALSO:  “Not Even Jay Z […]

Mugeez – Bounce It (Prod By Zodivc)