Acting has become a lucrative business that you see young and old people alike venturing into it. Some great deal of actors in the northern movie industry are truly making huge amounts of money from that field. But, some of them don’t only make acting their sole source of income, they have other avenues where they make money to supplement what they make from acting.
In Ghana, we have experienced a lot of actors bringing to the public domain their political affiliation to which many people argue should have remained hidden. Lawyer Gbangli, an ace actor in the Dagbani movies, and one of the favorite stars of the northern sector, yesterday took to his Facebook timeline to share a grid of photos that has some of the most popular politicians in the north, including; Lawyer Haruna Iddrisu, Alhaji A.B.A Fuseini, and Mr. Alhassan Suhuyini, who are all members of parliament for the New Democratic Congress, NDC. Also is that grid of photos is H.E. John Dramani Mahama, former president of the republic, who became president on the ticket of the NDC, and Mr. Mutala Mohammed, a parliamentary aspirant for the Tamale Central constituency, also on the ticket of the NDC. Lawyer Gbaginli describes the aforementioned as the most hardworking leaders in the country.
The ace actor after making that declaration on his Facebook timeline received some bashing from the people as his message didn’t go down well with many. A lot of his fans and followers expressed their disappointment in him for making his political affiliation known and making such declaration in public.

READ ALSO:  #EndSars: ‘It’s Not Over Until It Is Over’ – Runtown Vows

After making that post a lot of his followers have expressed their disappointed in him for sharing his political colours on such platform.
Below is a copy of his post on Facebook : 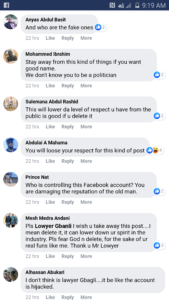 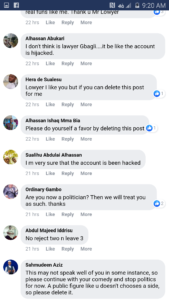 Fancy Gadam Presented Two Nasco TVs to aged women who were seen in a viral Video Dancing to his ‘KOM’ song.

DJ BAT CALL FOR THE ARREST OF KULCHIRI OVER HIS EDITED VIDEO ON MACCASIO TUMA SONG.