The Gadam Nation president, Fancy Gadam was at the grounds to register his presence and also appreciate the role Tuba Zaks played in uplifting the image of music in the North and also his contribution to the lives of other musicians in the region. 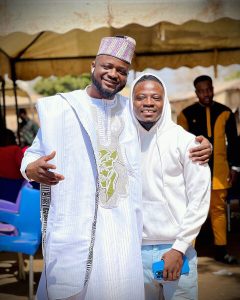 But to Fancy Gadam‘s surprise, Maccasio was also at the grounds at the same time that they arrived.

Maccasio without any doubt being the eye of Zola Music also came to grace the occasion as a label mate and a brother who have contributed greatly towards the success of the “Maccasio”, he is now and the 69 Brand.

Their music rivalry started in early 2014 when the two music kings battled over who has the large fan base in the region through their events grounds to date.

This is the second time these top music rivals are meeting within the year though efforts were made by prominent people in the region to get both of them on a single song that seems not to have seen the light of the day.

Music experts in and outside the region however believe that their music rivalry has played important role in the growth of the music industry down North to the rest of the world because of the huge numbers both of them have been pulling during their events.

Below is A Video Of Fancy Gadam, Maccasio and Tuba Zaks.

I Pay School Fees For Over 3700 Children – Tonto Dikeh.