Management of Tamale-based television Station, Sagani Tv has issued a 5 years ban on Walugu Lana and his music.

The decision was taken by management after an emergency meeting held by the board of the station after the artist physically assaulted a co-panel during a live program on the station dated 1st June 2022 on North Art with Sadiq Cybha.

The ban took effect in the late hours of yesterday after the official statement was published on all the station’s handles and that of the host handle.
Below is a copy of the issued statement: 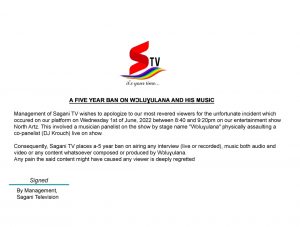 One of the highly-rated controversial musicians of our time now, Walugu Lana, has launched a fresh musical attack on the King Kong Movement Boss, Ahmed Shaman. The two have engaged in this undying banter for […]

Baron De Jarule Add Up His Voice To Maccasio And Fad lan Brouhaha.

Walugu Lana Disappears With Lighting Speed As Angry Youth of Lamashegu Chased Him.

Controversial music star, Walugu Lana disappeared with the speed of light after a section of angry youth at lamashegu averted their anger on him following his recent comments on how strong he is during a […]