One of the highly rated radio personalities from the Northern part of Ghana, Robicon Mornahson has taken to the comment session of Is-Hassan Dablee to lecture a fellow media personality who works with Zaa radio on the dynamics of entertainment. He said “An immature and ignorant critic, music has gone pass such unnecessary criticism from radio presenters who just want to gain attention.

Until you learn what entertainment is all about, you will not understand what an artist is doing at a time like this (When everything has come to a stand still, because of a pandemic).

Entertainment has gone beyond mixing tracks and greeting young girls on air.

This short lecture comes shortly after the safe journey drive show host for Zaa radio, Dj Bat took to his social media to downplay the hard work of the multiple award winning music star, Maccasio after he released a song dubbed “Sherifa”.
He wrote :

The story was picked up by Is-Hassan Dablee and later shared on his timeline when Robicon Mornahson joined the list of commenters to deliver his short lecture.
Check out what he shared: 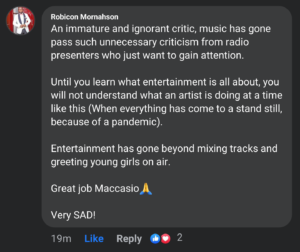 Maccasio is one of the biggest household names in the Northern part of Ghana, who have stage a lot of successful concerts both in and out of his confort zone. He have also released a […]

Sherif Abdul Majeed known in showbiz as Maccasio have officially announced the newly set date for his Throne Concert at the Aliu Mahama Stadium in Tamale. The event which was supposed to come on earlier […]

Meet The Most Featured Female Model in Northern Ghana’s Music.