Mohammed Hafiz better known as Gee face host of NTV’s Trending/Dinchena program has angrily replied to a member of the 69 management, Fila Gaat, over last night Virtual Concert which was been aired on NTV and their Social media handles.

The program according to the station was supposed to be a live program but per our checks it was a recorded and played with a whole lot of technical challenges.
Upon noticing some of the technical challenges, a member of the 69 management by name Fila quickly went onto his Facebook handle to throw shots at the station for the poor work done. He got a reply from one of the Mcs for the night who was also at home watching the program few minutes after his post.
And this was what he had to say;
You think tv production is about changing phone housing under Fila comment section.
Check it out below: 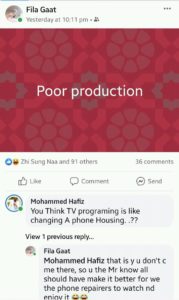 Sherif Abdul Majeed known in showbiz as Maccasio have officially announced the newly set date for his Throne Concert at the Aliu Mahama Stadium in Tamale. The event which was supposed to come on earlier […]

Multiple Award winning superstar, Maccasio teams up with the Overall Nea Artist of the year, Wiz Child on this latest jam dubbed “Gulma”.The song was produced by Ojah Drum. Check out the Official Music Visuals […]

Mugeez – Bounce It (Prod By Zodivc)

Shatta Bandle Set To Thrill His Fans In Dubai