Award-winning Ghanaian celebrity, Martin King Arthur known widely in the World of Showbiz as Kofi Kinaata has ‘sadly’ announced the cancellation of this year’s edition of his annual ‘Made in Taadi concert’.

Kofi Kinaata took to his official social media handle to announced that due to the COVID-19 outbreak this year’s concert would be virtual.

READ ALSO:  Mr Ibu Recounts How He Almost Died After He Was Poisoned By His Staff (Video)

Well, the Things Fall apart hitmaker has taken a sharp U-turn as he released a statement to announce the cancellation of 2020 Made in Taadi Concert on his social media handle.

In the statement, the popular annual concert was cancelled due to circumstances beyond his team’s control.

Read the full statement below: 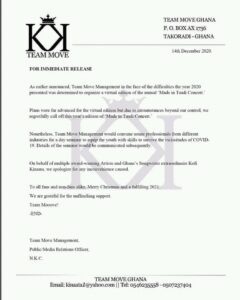 Fancy Gadam is out with another hottest banger off his Dream Album entitled Fara and it features Kofi Kinaata on it.The song was produced by Dr Fiza. Download Listen & Share READ ALSO:  Tuba Zaks […]

Host for one of the entertaining reality TV shows in Northern Ghana, Chop The Mic which is aired on Sagani Tv,  Abdul Rahaman Haruna known in the media landscape as Baron De Jarule has shared […]