Tamale based renowned video director, Abdul Razak Zakaria known by many as Marvelous was last night wounded with cutlass by unknown young men during the fire festival in Tamale.

The famous Video director, Marvelous was on duty to cover this year’s fire festival by the Tamale based television station, Might TV, when the unfortunate incident happened. 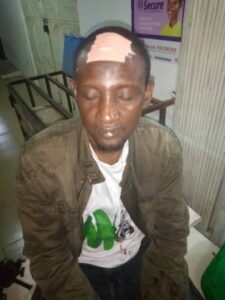 An eye witness to the incident indicates that the young men numbering up to 10 came from the direction of the celebration to cutlass the Might TV official cameraman who was busy recording the event on his forehead.

READ ALSO:  SAPASHINI ARRESTED BY THE GHANA POLICE SERVICE IN WALEWALE OVER BREACH OF COVID 19 PROTOCOLS DURING SALLAH POOL PARTY.

The eye witness with the help of friend quickly rushed the injured Might TV worker to the nearby health facility for dressing.