The Chief Executive Officer of Parara entertainment thought it wise to entertain his electorates as well as the general public within his electoral area with great performances from the big industry shakers like the 69 music boss, Maccasio, Gadam Nation president, Fancy Gadam, Wiz Child, Fad Lan, Is Rahim, Double Tee among others.

The victory concert will be stared by Dj Carlos and the host of Dinchana/Trending, Mohammed Hafiz ( G face).

Dignitaries within both the region and outside the region will also be in attendance to aid in making the program a successful one. 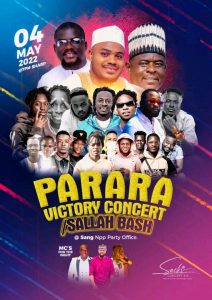 The young finest Business Mogul, Mohammed Zuberu known widely as Linkx nearly got himself drown in a pool of water during the video shoot of Fad Lan’s Abundance song The street fame music signee, Fad […]

MACCASIO HIT HARD ON COLLEAGUE ARTISTS FOR WHAT IS TERM AS “SOCIAL MEDIA JABS”.

Tamale based Ghanaian superstar, Sherif Abdul Majeed known by his stage name as Maccasio yesterday took to his social media handle to hit hard on 5 different artist in less than 1 hour. READ ALSO:  […]

T Bird Express Gratitude To Fans In Yendi For A Successful Concert.

Shatta Wale Enskined Dancehall King By The Dakpema Of Tamale

HOST OF CHOP THE MIC EXPRESS GRATITUDE TO DJ PARARA & SADIK CYBHA FOR TURNING HIS DREAM INTO REALITY.