Fantana who was signed to Rufftown Records officially got her contract terminated by the  CEO for the Label, Ricky Nana Agyeman, popularly known in the World of Entertainment as Bullet.
The Afrobeat musician, Fantana after her feud with her label mate, Wendy Shay received a letter from her boss.

In a letter titled “Request For A Mutual Termination Meeting,” the company said that Fantana’s actions in the past days have greatly affected the Rufftown label.

During an interview on Friday, Fantana disclosed that Wendy Shay did not really have hit songs or works that can give her international recognition. She further went ahead to tagged Wendy Shay as a local champion.

The ShyGeng Queen took to her Instagram page to call out the ‘Girls Hate on Girls’ singer for only creating news but not hit songs.

Below is the Official letter signed by the CEO BULLET 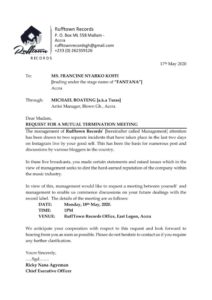 Award winning Ghanaian songstress, Wendy Shay of Rufftown Records took to her twitter page to preach peace between the two major political parties in Ghana (NPP and NDC). According to her, she was not in […]

Wendy Shay is undoubtedly one of Ghana’s most hardworking  musicians. She is currently signed onto the RuffTown Records and have released a number of hit songs into music market. Wendy Shay officially teams up with […]

The newly signed artist of Rufftown Records, Fantana in an interview with Chris-Vincent Agyapong revealed that even though it’s shameful to say in public but the truth is she cannot cook. Fantana revealing her inability […]

Maccasio Belittle The Efforts Of Bloggers In The Promotion of Bless Dee Concert.