One of the most successful musicians to have hailed from the Northern part of Ghana, Ahmed Mujahid Bello, affectionately called Fancy Gadam, in the world of Showbiz, has taken to his social media handles to render an unqualified apology to his followers and the public for ignorantly sharing a post that seeks to promote LGBTQI+. 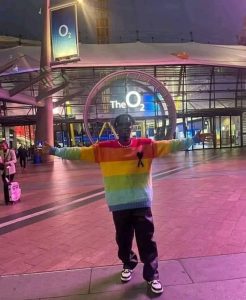 The music star is currently in London after performing at the recently held Ghana Music Awards in the United Kingdom.

The music star after realizing his mistake ran back to his handle to render an apology to his fans and the public over that post which he attributed to being ignorant on his part as a musician.

Blame Yourselves For Not Investing In Your Crafts – Nash Iddi jabs Fancy Gadam & Maccasio over 3 Music Awards Brouhaha.

Ghanaian businessman and social media influencer, Nash Iddi after encountering heavy social media attacks from Maccasio and Fancy Gadam over their exclusion in the 3 Music Awards Nominations a couple of days ago have rebuttal […]

Fancy Gadam pleads with the general public to help donate in saving the life of A music Fan.

Multiple Award winning music star, Ahmed Mujahid Bello known widely as Fancy Gadam leader to the Gadam Nation has proven to the rest of the world that there is more to life outside the entertainment […]

Fancy Gadam On A Mission To Fill The Centre For Art in Accra With Kom Concert.

Dj Bat wrongly accused and beaten by some area boys.