Nothing I Get” Hitmaker Fameye has finally detailed what happened between him and his management which led to an altercation.

In an exclusive interview with Zion Felix on the “Uncut Show” he revealed that he was provoked by his manager and the Team.

According to Fameye, it all started when his manager and a group of guys approached him for money handed him by his Italian promoter name “Young Mission” for an event contract  which management gave him the go ahead to sign. 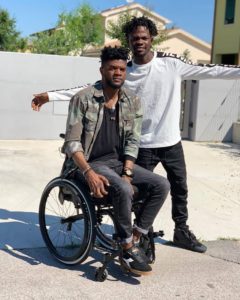 He added that, he told them to allow him to finish his performance before they talk about the money because he used his own money to buy costume for the Europe Tour, so they have to deduct it from the money at hand but his management team did not agree to him which led to an argument.

He also went on to deny the allegation that he slapped his Manager Ogidi Brown, Who to him was sitting in his car when the guys approached him for the money.

The musician stated that he hit the phone used to record the scene down after he warned them not to record their argument which they refused to listen.

He disclosed that his manager signed him because of his humbleness but not his talent.

From the archives of Fameye we present to you “Sika Duro.The song was produced by B2. Download Listen & Share. Fameye – Sika Duro (Prod. by B2)   Downloads & Reactions: 1,258

The much awaited collaboration between multiple award winning musician Bisa Kdei and Fameye is out. Bisa Kdei is undoubtedly one of the few good song writers in Ghana and having him and Fameye, another talent […]

“We’re gradually losing some of our actors to other trade due to the absence of cinemas”- Alhassan faisal plead to philanthropies for Cinemas.

ATAAKA RUNS TO ACCRA ONLY TO BATTLE WITH UNDERGROUND ARTIST ON RADIO.