Management of the “Youth Empowerment Agency” YEA has denied media reports that Ghanaian songstress Wendy Shay has been stripped off as one of the ambassadors of the agency.

Critics descended heavily on the Ruff Town signee Wendy Shay after social media was inundated with images of her and ex-President Kufuor in which she wore a dress that exposes the midsection of her body which saw the former President looking at the exposed part of her body.

Mr Sammi Awuku who happens to be the chairman of YEA also expressed his utter disappointment over the viral pictures and said the bad feedback that has flooded the medium was “definitely not the kind of publicity and feedback the Board of YEA expected after the visit of the YEA Ambassadors and Management to Former Prez. Kufuor.”

READ ALSO:  THAT RADIO FEELINGS IS GRADUALLY FADING OFF DUE TO LACK OF PROFESSIONALISM - MACCASIO CRIES OUT. 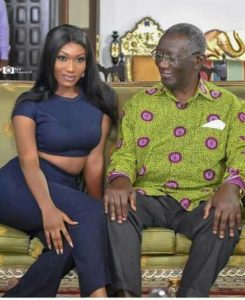 Earlier there were reports the Vodafone Ghana Music Awards “Best new artiste of the year” was omitted from a list of celebrities working for the YEA as ambassadors.

Responding to the claims, YEA management dismissed the rumors on its official Facebook page “Wendy Shay has not been sacked as an ambassador of YEA.”

Award winning Ghanaian songstress, Wendy Shay of Rufftown Records took to her twitter page to preach peace between the two major political parties in Ghana (NPP and NDC). According to her, she was not in […]

Sizzling pictures of Jackie Appiah surfaces on her 36th birthday

Today marks the 36th birthday of Ghana’s finest actress, Jackie Appiah. As usual of millennials, the actress has taken to Instagram to flood the platform with her stunning photos. In one of her posts, Jackie […]

Wendy Shay is undoubtedly one of Ghana’s most hardworking  musicians. She is currently signed onto the RuffTown Records and have released a number of hit songs into music market. Wendy Shay officially teams up with […]

Akuapem Poloo is my Twin Sister – Cardi B