Asadachi was one of the popular songs that once hit the airwaves like magic and till now the song is still doing well on the airwaves. And the brain behind that hit single is Sharp Dee who featured the Multiple Award Winning Superstar; Ahmed Mujahid Bello known in Showbiz as Fancy Gadam. Sharp Dee made interesting revelations with regards to the cause of the separation between himself and her former Label; Marisky Entertainment. 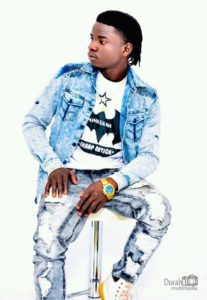 The Rap Star opined that the cause of his walking away from the label is 20 Ghana Cedis. According to him, all the promises made to him by his manageress to be met after his debut Album Launch didn’t see fruition. The artiste has his debut album launch at the Picorna Gardens in Tamale and it was followed by a pool party that was equally successful with a lot of people in attendance at the Discovery Hotel.
Sharp Dee made this revelations during a Facebook Live Interview with him on Northern Entertainment Filla (nefgh.com )
Time with Entertainers with Nabi Yong Gh as the interviewer.

READ ALSO:  I took Double Tee off from my Yet to be  Released Album- IsRahim.

He further stated that he bought a phone with his own money and was left with nothing so he went to his manageress, Madam Mariam, popularly known as Marisky and asked her for just 20 Ghana cedis and to his surprise, his manageress told him she had no money. Unfortunately, her manageress started abusing him verbally and that led to some exchange of abusive words between them.

“So upon my arrival home, I made up my mind to move on with my life” says Sharp Dee. I was able to get myself another label that aided me a lot and are still trying their best to make sure that I excel in my music career.

Watch the full interview below :

The Taaka Music Boss, Yakubu Issah known widely in the showbiz as Ataaka, formerly Ataaka the rap John Cena and now Ataaka the rap, has considered himself to be cursed for been in the northern […]

Onenaira is one of the most creative and talented artist who has a dual nationalism, that’s Ghana and Nigeria. He jumped onto the musical ladder and have since been one of the best and creative […]

Hajia4Real is not responding to my messages – G Face cries out loud.