Dmtl Signee, WizChild is undoubtedly one of the household names when it comes to the most trending artist in Northern Ghana right now and you can’t deny that fact.

The Legend Boy over the weekend appeared on Time with Entertainers on Northern Entertainment Filla which is a Facebook Live stream program that comes off every weekends.
During the interview, WizChild touched on so many issues surrounding his camp and other relevant issues as well. 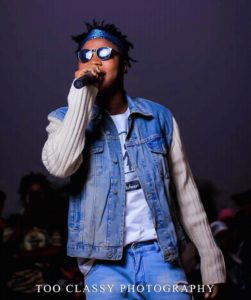 A bit of the discussion bothered on him and Fad Lan, he however, stated that he was cool with Fad Lan; when some of the viewers wanted to know when they should expect a possible collaboration between the two.
He assured the fans that when the time was due they would.
He clarified that the song with Stonebwoy wasn’t his song but for him the Bhim Nation President.

At the tale end of the program, he was asked on when should the fans expect a concert from him. He answered that they should prepare for his International Fest Concert which is slated for 4 April 2020 live at the Aliu Mahama sports Stadium.

He further encourage the youth to stay loyal and entreated them to believe in themselves for that is the only way we can grown.

Dmtl/Street Fame signee,Fad Lan comes through with yet another banger off his “Life Too Short Album” entitled “Abundance” that featured Links in it.The song was produced by PeeJay) READ ALSO:  ‘I Don’t Believe Hell Exists’ […]

Onenaira is one of the most creative and talented artist who has a dual nationalism, that’s Ghana and Nigeria. He jumped onto the musical ladder and have since been one of the best and creative […]

International legend boy,Wiz Child under the management of Dmtl comes through with yet another hot banger entitled “International“.The song was produced by WebBeatz. Download Listen & share your thoughts below: READ ALSO:  I HAVE GIVEN […]

Sarkodie ft. Mr. Eazi – Do You (Prod. by Guiltybeatz)