One of the most sought after music stars, WizChild, today joined a group of youth in the Kalipohin electoral area to embark on a Massive Clean up exercise organized by Fresh One’s Empire.

A group of young energetic men and women who are situated at Kalpohin a suburb of Tamale in the Northern part of Ghana. The Bontahli hitmaker was accompanied by one of the contestants in the recently held Dagbon Nagbegu Competition,Basam and his Road Manager. 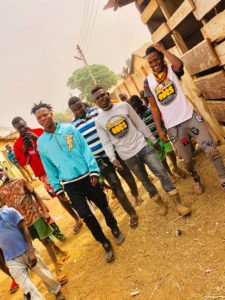 The two hour clean up exercise was aimed at clearing the chocked gutters in one of the highly used road link in the community, popularly known as “abortion road” for the numerous potholes on that stretched of the road.

The newly assembly member for Kalpohin electoral area, Mr Nabila, who couldn’t hide his excitement after the cleanup exercise thank the Legend Boy and the Organizers for such a wonderful initiative and encouraged them to keep up their great works towards the growth of the community,Region and the Nation at large.

DMTL music signee,Wiz Child comes through with yet another beautiful love song for the year and it’s entitled “Kum”meaning “Hunger”.The song was produced by OjahDrumz. Download Listen & Share Wiz Child – Kum(Hunger) (Prod By […]

Multi-talented Ghanaian music star, Is Rahim has come through with another banger off the Lions King Album dubbed “Saafe”.  It serves as a follow-up to his most recent release, Karima, an addictive track that featured […]

MACCASIO – THE BOY (PROD BY TIZZLE)