Award winning superstar, Ahmed Mujahid Bello affectionately called Fancy Gadam in the world of entertainment have called on a Tamale based Radio personality, Mohammed Abdul Fatawu known also on radio as Dj Zolah to kindly unfollow him on his social media handles if he(Dj Zolah) is not comfortable with his dance moves exhibited during live TV interviews.

His comment comes shortly after the Dindam Show host on radio Tamale questions the Kom hit maker on why he always dance during his interviews, Dj Zolah left this question in the comments session of a Facebook post made by Fancy Gadam.

The 5 minutes music signee replied the comment with the indication that his work goes hand in hand with dance and if he “Zolah” have problem with that he can go ahead and unfollow him.

Fancy Gadam after releasing his current banger “Kom” which literally means Water embarked on a Promotional tour both on radio and on TV in the Nation’s capital Accra.
During most of the interviews, Fancy Gadam was often seen exhibiting his Kom dance skills to the host and viewers which seem not to be okay with Dj Zolah.
Check out Screenshot below;

READ ALSO:  Going to where I'm not invited is Haram - Michy revealed. 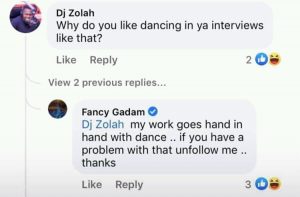 Tamale-based Ghanaian music star, Zakaria Abdul Wasiu known by his stage name as T-Bird has disclosed his intention to stage his first-ever commercial show at the Aliu Mahama Sports Stadium in Tamale after fasting. The […]