Ghanaian music sensation, Don Ziggy. In a recent post on Facebook, the singer said he started singing at an early age and has always looked up to Networq Lagfu music.

Inspiration derived from the Yel Zoli hit maker has aided in fueling Don. Ziggy’s talent and passion for music led him out of his homeland to Tamale. After releasing a couple of singles,

Ziggy is currently making waves on YouTube with his music lyrics and unique style, and this has won him millions of fans within a short space of time.

The most popular “Zinahgu” hit maker took to one of Networq Lagfu’s posts on Social media to express gratitude for the inspiration gotten from him in his musical journey.

READ ALSO:  Wedding Is A Waste Of Money And Resources – Reggie Rockstone’s Wife 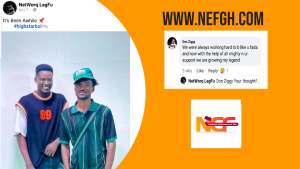 Tamale based Ghanaian Musician, Abdul Razak known by his stage name as Bawlee over the week appeared as guest on Time With Entertainers telecast through the Northern Entertainment Filla Page on Facebook. The Born again […]

I Will Beat You Like My Own Child Whenever You Step Foot Into My Zone. Rastony to IsHassan Dablee.