Reports Reaching Northern Entertainment Filla has it that a Tamale-based media personality and others were shot by unknown gunmen at Kalariga a Suburb of Tamale in the Northern Region.

The Neesim Fm’s weekend educational program host, Suale was among the people shot by the armed robbers who came to rob a mobile money vendor within that area.

Below is a picture of the shot media personality hosting a program. 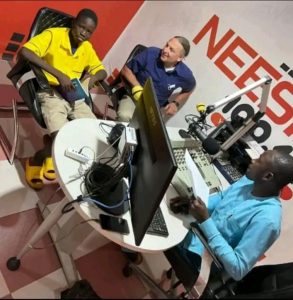 Mohammed Abdul Fatawu known by many as Dj Zola is One of the young and finest radio personalities from the Northern Ghana, Who works with Neesim Fm as  Drive Time Host and also Double as […]

Musicians Union of Ghana(MUSIGA)  has been described as one of the most useless bodies by  AFA Staff, a tamale based Radio personality. The Tamale Based Radio Personality has worked with a lot of media house […]

FADI LAN SHOOTS MUSIC VIDEO FOR HIS YET TO RELEASE SONG WITH FANCY GADAM.

WHO IS TO BE BLAME FOR THE SILENCE OF CF OPTIONAL KING?

MOST OF OUR PRESENTERS DEMAND S3X FROM FEMALE ARTIST IN ORDER TO PROMOTE THEM- AJ SUGAR REVEALED.