Former Not Again music signee, Imoro Abubakar Saddiq known by his stage name as Saddiq Shishi has officially parted ways with  his ex Label with a Diss Song dubbed “Burning Up”.

The Win & Stay hitmaker’s decision came shortly after a misunderstanding erupted between he(Saddiq Shishi) and some of the management team members. 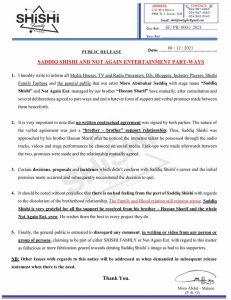 Speaking to one of our media colleague, Saddiq explained that he was tasked to diss Maccasio in a new song after the Throne Concert which he felt wasn’t right, since he was given the opportunity by the host of the event to showcase his music craft to the masses without a fee.

He further channelled his energy into explaining certain things in the diss song produced by him to the former management.
Check it out below;

‘Running A Record Label For This Long Is Harder’ — Don Jazzy.