Mavin Records Boss, Don Jazzy is one of the oldest-standing music executives in Nigeria and he has openly admitted that to do best is not quite easy.

He revealed this on his official social media handle, while appreciating fans for their support, following the victories recorded by two of his Signee’s, Rema and Johnny Drille at the 2019 Headies Awards.

Below was what He Shared on his handles;

“Running a record label is hard. Harder to run one for as long as I have. This is why I can never take for granted the support y’all have shown us all these years.”

Rema, a young champ under his label won the most sought-after ‘Next Rated’ award at the 13th edition of the Headies.
This is a spectacular feat for the ‘Spiderman’ singer who got the plaque in less than a year Don Jazzy and D’Prince officially unveiled him in the industry.

Johnny Drille who is another unique artiste on Don Jazzy’s exotic record label, danced him joyously with the ‘Best Alternative Song’ award with his fantastic song ‘Finding Efe’.

Don Jazzy wrote further, appreciated everyone who voted for his artistes, “Thanks to everyone that voted. Congrats Rema & JohnnyDrille.” 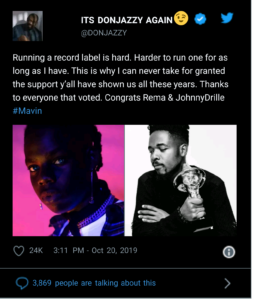 DJ Cuppy Reveals Her Greatest Fear About Music In Nigeria

Mavin Records signee, Rema enrolls Norwegian DJ and record producer, Matoma to release an impressive remix to his 2019 banger called “Dumebi“. Dumebi seems to be Rema’s biggest track so far with about 17 Million […]

Mavins Record star, Rema is out with a brand-new song titled “Ravers Tune“ which featured Young Jonn and Bluenax. He drops this tune for fans ahead of his upcoming album which he has announced will […]

Sherifatu Gunu expressed gratitude to fans for making her who she is now.