The Tamale-based premier league club, Real Tamale United, has officially confirmed Coach Baba Nuhu Mallam’s appointment as the club’s head coach for the upcoming season by the Board.

The former Technical Director of Utrecht football Academy and the Head Coach of the Ghana women’s under-17 team, the Black Maidens, succeeds Coach Sayibu Tanko, who stepped down after the 2021/2022 Ghana Premier League season.

Following a narrow escape from relegation in the 2021–2022 season, the club decided to hire a suitable coach who could assist the club in winning the upcoming league in which they will compete. The main target of the club is to get the team back to where it belongs, competing for trophies as it’s always the demand of their fans down North of the country or getting them a place in the top four at the end of the football season.

Based on his excellent work at the national level and how he had managed affairs in the past at Tamale Utrecht football academy till now, Baba Nuhu Mallam is said to have a good track record to keep the pride of the north competitive for the upcoming season. He is a very demanding coach who always has good set principles and targets for his team. He is tactical disciplined and tends to work and deal with any player at the professional level in Ghana.

READ ALSO:  RTU SLOWLY JAMS TO THE TUNE OF RELEGATION IN THE GHANA PREMIER LEAGUE.

The head coach has since begun work at the office as the club will be commencing pre-season training at the Aliu Mahama Sports stadium on Tuesday, August 16th to hit and get their season up and running.

Coach Baba Nuhu Mallam is hoping to meet his new players for the first time and try to build a team from those available and if there’s any addition the club will need to strengthen the squad we will know from there.

The Club officially released a press statement in which they unveiled the club’s new coach to the rest of the world and it reads, ” The Board is happy to affirm the decision to appoint Coach Baba Nuhu Mallam as head coach of RTU. The Board also agreed to the request of the coach to engage the services of the under-listed persons as his backroom staff.
1. Mr. Mumin Abdulai as first Assistant Coach.
2. Mr. Tawfik Alolo as second Assistant Coach.
3. Mr. Abdulai Mustapha as Goalkeeper’s trainer.
4. Mr. Lawrence Mawulorm is the club’s video analyst.

READ ALSO:  I WILL NEVER PARTAKE IN ANY REALITY SHOW THAT FINDS IT DIFFICULT TO AWARD ITS PREVIOUS WINNERS - SAYS LIL BLACK.

These five constitute the technical team of RTU for the 202/2023 season, and everyone is looking forward to seeing how they will work and bring success to the club. The fans are unhappy with the delay but happy in the end because they have finally found the men to lead them in the fight for glory.

There will be lots of tussle and rivalry this season as Tamale City FC has also gained promotion into the Ghanaian top flight of football. The people of Tamale can’t just wait to see what both teams have to offer them. “Football is finally back home, they say.” 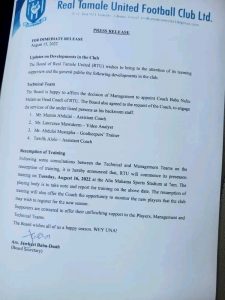 Stonebwoy – Take Me There (Prod By Chemist Records)

DJ PARARA IS THE ONLY RICH PRESENTER IN NORTHERN GHANA – OJAH DRUMZ REVEALED.