One of the most hilarious comic actors from Northern Ghana Movie industry,Mohammed Abdul Wahab known widely as Nendow Kantong was eskinned as Yani Kugu Malgu Naa at the Kugu Naa’s Palace.

Source close to the actor revealed to us that Nyab Kugu Naa who happen to be a loyal fan to Nendow Kantong after watching a number of his movies invited the movie star over to his palace and offer to give him that chieftancy title.

READ ALSO:  ‘I Came To Accra With A Bag And A Pair Of Shoes’ – Fella Makafui

The source further has it that the actor,Nendow Kantong gladly accepted the proposed chieftancy title offer to him by nyab Kugu Naa.

The needed customary rights were done and he(Nendow Kantong) was eskinned as the new Kugu Malgu Naa over the week.

The newly eskinned Kugu Malgu Naa was accompanied to Kugu Naa’s Palace with alot of actors,producers and other movie lovers. 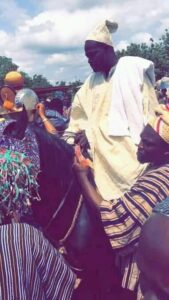 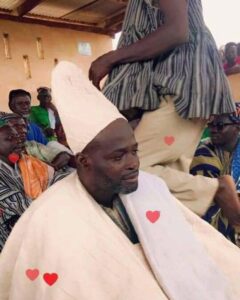