The 69 Music president Sherif Abdul Majeed known widely as Maccasio in the showbiz has played a crucial role in putting the Northern Part of Ghana on the musical map, especially rap music. 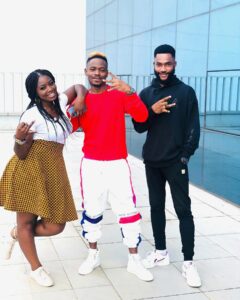 The zola music frontliner during his interview on Rhymes Live on Ghone Tv was asked about the relationship between himself and the Gadam Nation Boss,Ahmed Mujahid Bello known as Fancy Gadam.
In his reponse, Maccasio made it known that they won’t go the shatta wale and stonebouy way of answering questions when it comes to rivalry.  He further stated that Fancy is his brother from another mother who is cool and working hard just like him to also put music from the north on to the musical map, however, the fans are making it look like they are fighting. He went on to add that they are all working on achieving the same agenda.
He was further asked by the host and co- host of the program as to who is the king of music…. ?
Which he answered with a smiley face, I’m the king and fancy gadam is always a king.

One of Ghana’s finest music stars Maccasio with a banging piece of music dubbed “More Rap” for his fans and music lovers. Download & Enjoy Below: Maccasio – More Rap (Prod. by Mix Master Garzy) […]

Shatta Wale – What Deh Go On (prod by No Joke)