Artiste manager Ogidi Brown and his signee Fameye have been subjected to a very rocky relationship.

The duo have been in the news for quite unfortunate situations. Ogidi brown alleges that Fameye’s sudden arrogance after attaining fame is the cause of this. Others believe that Ogidi and his OGB label owe Fameye some allegiance because the record label became known only because of Fameye’s “Nothing I get” song. 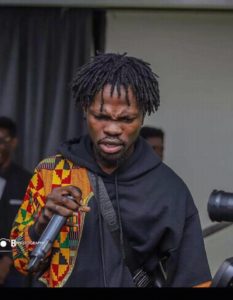 Reacting to this claim during an interview with Zionfelix on the Zionfelix Uncut show, Ogidi Brown said his money is what made Fameye who he is.

According to him the relationship was mutually beneficial to both of them.

He revealed even though Fameye had songs with Kofi Kinaata and Stonebwoy, he only gained clout after he was taken on the wings of OGB music.

My Manager Provoked Me To The Bone – Fameye Speaks

Nothing I Get” Hitmaker Fameye has finally detailed what happened between him and his management which led to an altercation. In an exclusive interview with Zion Felix on the “Uncut Show” he revealed that he […]

From the archives of Fameye we present to you “Sika Duro.The song was produced by B2. Download Listen & Share. Fameye – Sika Duro (Prod. by B2)   Downloads & Reactions: 1,378

Walugu Lana Disappears With Lighting Speed As Angry Youth of Lamashegu Chased Him.