Mohammed Baba Musah who is known to many as Mr INeat or Kulu Mallangah have officially resigned as host and Committee member for Sagani TV’s  Chop de Mic program. 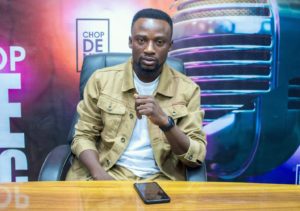 His resignation came as a result of some changes made by CEO for the upcoming second edition which he is not comfortable with.

Kulu Mallangah was the host for the Chop the mic reality Show first edition and also a committee member for the program.

Mallangah made his resignation known to the world through his official Facebook handle which was seen by nefgh.com
Below is a copy of what he published on his Facebook timeline:

“I want to make this known that, I, Kulu Mallangah, has officially resigned as the HOST and a Commitee Member of CHOP DA MIC reality show, due to some new changes made by the CEO, which did not go well with me or planned from the start. The second edition is about to kick start and jingle is out for the new contestants to pick forms. I wish every one out there who picks a form good luck! And a successful show. Thank you! 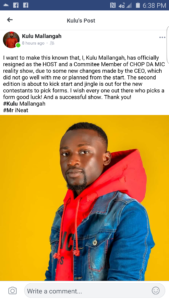 Talented Ghanaian rapper, Don Dee recruits Fad Lan onto this well-composed tune dubbed ” Target”. This happens to be the second song from the music star after inking a distribution deal with the masked team […]

One of Ghana’s finest and most creative artist, Ahmed Mujahid Bello known by his stage name as Fancy Gadam have officially revealed his plans towards a young talented upcoming music star, S Bio. The Kom […]

Bakilla Set To Welcome The New Year With A Knock On People’s Doors With His Kokoko Song.