Maccasio is one of the biggest household names in the Northern part of Ghana, who have stage a lot of successful concerts both in and out of his confort zone.

He have also released a lot on songs that went viral both in the 5regions of the North and the entire country as well notable among them are: Dagomba Girl ft Mugeez of R2Bees, Hold me tight, Funs,Inside ft Zeal of Vvip, Money among others.
The management team to the artist set up a date for one of their upcoming concert which was later concelled due to the President Ban on public gathering,
Several months later the management team in consultation with the appropriate authorities have decided the allow the event come on at the Aliu Mahama Sports Stadium in Tamale dubbed “The Throne Concert”.
The Recent winner for Chop the Mic reality Show, Don Dee took to his Facebook handle to plead with maccasio for a slot to perform to the audience on the day of the event few weeks before the release of performing artist.
The sad news upon seeing the official list of artist to perform has no Don Dee on it even after his plea for mercy.
Check it out. 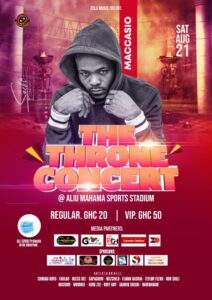 Separk Runs To Maccasio For A Feature After a Long Musical Break.

Separk David Rhymes of Kkc fame after a very long musical break is set to return back into action with a collaboration that features the 69 Music King, Maccasio. The go gaga hit maker made […]

The 2019 edition of the Ghana Music Awards UK was successfully launched Yesterday At the Accra City Hotel. Nefgh.com brings to you the official list of nominations for this year’s edition which has in it […]

“GO IN FOR THE DISABLED IF YOU DESIRE FAITHFUL & CARING PARTNERS”-DOUBLE ADVICE FELLOW BACHELORS .

Every Woman Is A Prostitute – Salma Mumin