Ghanaian sensational rapper, Sheriff Abdul Majeed affectionately called Maccasio in the entertainment industry is set to officially celebrate this year’s Damba festival at Tolon with the most talk about radio personality from Northern Ghana, Halik Musah known widely in the Media landscape as Mr Tell.
The Damba festival is celebrated in the Dagomba lunar month of Damba, corresponding to the third month of the Islamic calendar, Rabia al-Awwal.

Damba is celebrated to mark the birth and naming of the Holy prophet Muhammad, but the actual content of the celebration is a glorification of chieftaincy in Dagbon but not with specific Islamic motifs.
The festival is categorized into three sessions; the Somo Damba, the Naa Damba and the Belkulsi.

READ ALSO:  PLAYERS OF RTU AND THEIR MANAGEMENT ALLEGEDLY ATTACKED BY SUPPORTERS OF NSOATREMAN FC.

The KAM hitmaker, Maccasio after the Damba celebration will on the same night stage a show for the good people of Tolon and it’s environs.

Speaking to Northern Entertainment Filla, Organizers of this upcoming event, Abdul Firdaus Chief Executive Officer for Nobleman Entertainment disclose that the people of Tolon and it’s surrounding communities deserve better in the world of entertainment and shouldn’t be left out in meeting their favorite artists who are making it big in the entertainment industry.

He also noted that alot of people around the event grounds and it’s surrounding communities couldn’t make it to the artist “Maccasio” recently held Throne Concert and he thought it wise to bring Maccasio to them to also feel what he is capable of doing on stage.
Maccasio will be storming Tolon on the 20th October 2021 and will be doing so with Halik Musah also known widely as Mr TELL as mc. 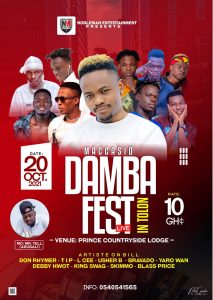 Kolee Movement & Deezy Entertainment signee,Lil Black is back again with yet another hot banger dubbed”God No Go Shame Us“.The danceable song comes shortly after his collabration with the 69 music king,Maccasio. READ ALSO:  Fancy […]

Blame Yourselves For Not Investing In Your Crafts – Nash Iddi jabs Fancy Gadam & Maccasio over 3 Music Awards Brouhaha.

Ghanaian businessman and social media influencer, Nash Iddi after encountering heavy social media attacks from Maccasio and Fancy Gadam over their exclusion in the 3 Music Awards Nominations a couple of days ago have rebuttal […]