Multiple Awad winning music star, Sherif Abdul Majeed respectful known in the world of showbiz as Maccasio was at the Aliu Mahama Sports Stadium to offer his support to the newly promoted GPL side Real Tamale United.

RTU is one of the oldest team to have come from the Northern part of Ghana,
The team went on relegation in 2012 and after years of countless trials to regain opportunity to the premier league failed.
The team has finally gained the opportunity in the Ghana Premier League after winning their last game with Unity Fc whilst their main contender Bofoakwa Tano drew with Berekum Arsenals.

READ ALSO:  THAT RADIO FEELINGS IS GRADUALLY FADING OFF DUE TO LACK OF PROFESSIONALISM - MACCASIO CRIES OUT.

Information Northern Entertainment Filla gathered revealed that Maccasio went there to perform for the players and football lovers that were in the stadium for free but had the opportunity of meeting business mogul, Ibrahim Mahama. A brother to the former president John Mahama.

READ ALSO:  Fancy Gadam pleads with the general public to help donate in saving the life of A music Fan.

Maccasio seized the opportunity to take a picture of the business mogul and also invited him to his upcoming Throne Concert slated for the 21st August 2021 at the Aliu Mahama Sports Stadium. 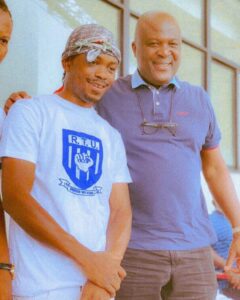 One of the highly rated radio personalities from the Northern part of Ghana, Robicon Mornahson has taken to the comment session of Is-Hassan Dablee to lecture a fellow media personality who works with Zaa radio […]

The Award Winning Superstar, Ahmed Mujahid Bello, widely known in the world of entertainment as Fancy Gadam, and his management have postponed their “Dream” Album Launch Concert that was scheduled to come off on the […]

Medikal Arrived In Tamale For The Throne Concert.

LCEE SET TO OFFICIALLY RELEASE THE JOURNEY EP THIS YEAR.

Bitterflesh of Kaya Accused Thug Omega of Stealing their Song.

Double Tee Promised To Drop A Song With The Self Acclaimed Music Ruler (Fancy Gadam) In Two Weeks Time.

I Support Everyone Equally in The Entertainment Industry-Mohammed Hafiz(Mr Trender ).

ATAAKA UNVEILED COVER ART FOR HIS “ZAMBA” SONG WHICH FEATURES WIZ CHILD AND THE DATE SET FOR IT’S RELEASE.