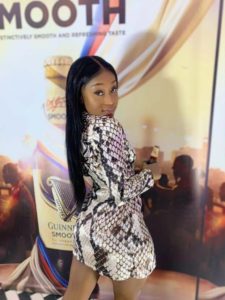 Efia Odo was a guest on ‘Day Break Hitz’ on Hitz FM hosted by Andy Dosty where she revealed many secrets about speculations that involved her name in it.

She cleared the air on her sexual relationship with Shatta Wale after several videos of them went viral that showed the two looking locked up in love.

On explaining who she’s really crushing on, the socialite revealed that it’s Kwesi Arthur.

Besides everyone thought it’s because she was starred in his music video ‘Nobody’ with Mr Eazi that’s why she’s choosing only Kwesi Arthur over Shatta Wale and others.

She added that her feelings for the Ghanaian existed even before they met and worked on his ‘Nobody’ video’.

I like him, even before I met him, I used to put on Twitter that he is my crush. I have a crush on him because he is a street boy and he has the street vibe with him. You know I love Gangstas

Well, it’s obvious because she has been spotted many times singing and rapping songs from Kwesi Arthur and also she has for countless times revealed that on Twitter.

#EndSars: Emotional Video Of Nadia Buari Mourning All Who Died As A Result Of Police Brutality In Nigeria

Award-winning Ghanaian actress, Nadia Buari has joined the #EndSars campaign with an emotional video where she is seen mourning all who died as a result of the police brutality in Nigeria. this year so far […]

Ghanaian reggae-dancehall musician, Shatta Wale has been ranting on social media after the confusion he created at the just ended Vodafone Ghana Music Awards. The ‘My Level’ hitmaker sent out refined jabs to his ‘rival’ […]

Sherifatu Gunu expressed gratitude to fans for making her who she is now.

DJ PARARA IS THE ONLY RICH PRESENTER IN NORTHERN GHANA – OJAH DRUMZ REVEALED.