This year’s edition of the MTN Hitmaker was launched at a ceremony held on Thursday, August 29, 2019, at the MTN House at Ridge in Accra.

The Hitmaker reality show is aimed at giving talented and authentic people who have the ability to sing and rap a platform to build their talents and prepare them for the music industry.

Famous female singer Eazzy, Richie Mensah of Lynx Entertainment and Kaywa of Highly Spiritual have been confirmed as the judges for this for this edition.

READ ALSO:  One Naira Ft Gonga – Because of You(Prod by OjahDrumz) 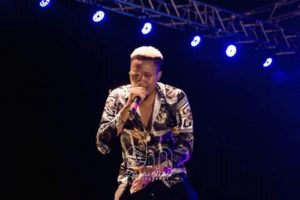 It was all over  social media  that the Jeje hitmaker, Onenaira, was amongst those qualified for this year’s MTN Hitmaker reality show season 8. But our checks for the day revealed that Onenaira was rejected from the reality show after the organizers had gone through the social media handled of the sensational singer. His manager, Dous Nelly says the committee after going through the profile of OneNaira says he already has a large fan base and a released album. But the Hitmaker is targeted at only upcoming and unknown artistes.

As the only Northern Representative was removed  from the competition, his manager believed it was just a ploy to sideline his artiste because the organizers upon hearing him knew very well he would have made it to the finals and even win the ultimate prize as Northerners are widely noted for voting massively in such competitions.

Dreamtym & Dn Entertainment signee,Onenaira is out with yet another banger titled “DURACELL“,The song is filled with sweet love vibes and was produced under the umbrella of Peejeey. READ ALSO:  ONENIRA – DURACELL (PRODUCED BY […]

Former Manager to Lil K, now Gonga was among the two pundit for a discussion on the Northern Star Chat show hosted By Saani Abdul Fadel known as Dj Fadel. During the discussion, the former […]

Shatta Wale – Letter To My Father

ALEEWA DAGOMBA VOWS NOT TO PLAY ANY DISS SONG AGAIN.