The 69 music King Sherif Abdul Majeed widely known in the world of showbiz as Maccasio officially took to his Facebook account to explain himself out,  after he and his team were accused of being the brain behind Gonga flop in the music industry by Big Malik of Kkc.

The Dagomba Girl hitmaker who seemed not to be happy with what the legend Big Malik said quickly went on to explain to the world about the situation.
He went ahead to explain that he was given the message and after recording his verse in the song, he left for Accra on the same day and never had the opportunity to listen to the song until it was released by Gonga(who was the owner of the song) and tagged Dj Ojah of been his witness to what he is saying.
Check-out what he posted below; 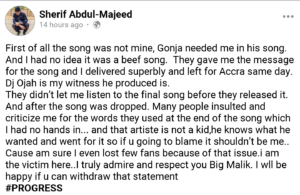 Tamale-based rapper Maccasio has given his account of what caused the feud between him and colleague Fancy Gadam, stressing that the singer is jealous of him. The two artistes who hail from the Northern region […]

Stonebwoy – Take Me There (Prod By Chemist Records)

Fancy Gadam – Nobody (Prod by DrFiza)