I was drag into prostitution at the age of 19, Born into a family of three. The family is just a nuclear family situated in Fadama in the Greater Accra region of Ghana. My mother and my brother still lives there even though I’ve relocated to Tamale to continue with my business “prostitution”. 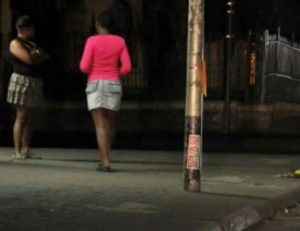 The underlying reasons that exposed me to prostitution was hunger and frustration. The streets of Accra is as deadly as the Jungle. where the wild animals make meal of the other animals in the jungle.

You can’t be a tamed human being on the streets of Accra and still get your daily bread, My colleagues will say “shine your eye”.

Now, the ins and outs of that sorrowful entry into prostitution started when I completed S.H.S and was in die need to continue my education, Mom was seriously sick and it was left unto me as the elders of her children to manage the affairs of the house.

I had nobody to ask help from, for my mother and also help provide food for me and my Junior brother. My eyes were misted with tears as I think about the unknown curses laid on my family.

Restless and unsettled?😓
I decided to call a friend of mine who live far as Lapaz to inform her about the situation at my end and also to inquire on how she could be of help to me and my family.

She invited me to her house and the meals for myself and my family was ready. I was very happy for her support to the family but it came with a condition that had to milk my holiness. Hmmm, How could I not resist this temptation?

She said she wanted to introduce me to her friends and we could be working together and, henceforth be making money for ourselves. Hardly did I know what the work was and how it would affect my entire life. With GHC100 note, she told me to go home and that one man will call me.

I left with smiles all over my face as I think of a life changing job at last, The said big man called around 7:32pm and insisted I should give him my location and he’ll come and pick me to his house.

Hesitant as I was, I obliged and within 35minutes we were at his house. He started touching me but I wasn’t happy with what he was doing to me, so I told him not to touch me again. He told me he will give me GHC1000 if I allow him to have sexual intercourse with him. He promise to double it if I spend the night with him but I vehemently disagree and walk out on him.

I was outside his house waiting to see if I would get a car to my house, I waited outside his house for about ten minutes without getting a car, I called my friend to narrate my ordeal with her but she insisted I should go back to him and make my money. She persuaded me to go back to the man of which I finally agree.

I spent the night with him and he indeed fulfill his promise of giving me GHC2000, the next day, I called my friend and she told me that’s what she does and she has made a lot of money from prostitution. From that day I became her close associate and we’ve been sleeping with men for money for the past 7 years.

THAT RADIO FEELINGS IS GRADUALLY FADING OFF DUE TO LACK OF PROFESSIONALISM – MACCASIO CRIES OUT.

MACCASIO AFTER HITTING HARD ON FANCY GADAM OVER THE RELEASE OF KOM RUNS TO IBRAHIM MAHAMA FOR KOM.