Ghana Football Association in the early hours of yesterday held a closed door meeting to select a suitable couch for the Black Stars of Ghana weeks after terminating Milovan Rajavoc contract. 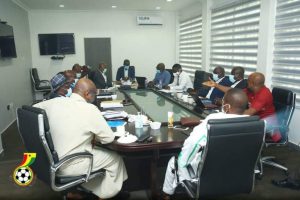 A final decision was made before the end of the meeting with GFA board committee and it’s  president, Mr. Kurt Okraku, to get the right men to lead Black Stars into the FIFA World Cup playoffs in March against their rivals, Nigeria.
It was a fruitful meeting, though most Ghanaians believed they had delayed in naming a coach to lead the National team. But, it’s better to be late than never, so they finally had something for the over 30 million Ghanaians.
The committee made coaching appointments for Ghana’s World Cup playoffs vs Nigeria.
Otto Addo takes the lead as interim head coach, with Mashud Didi Dramani and George Boateng as assistants and also Chris Hughton will be the technical advisor.

READ ALSO:  ‘Sue me or shut up’ – 2Face tells Blackface 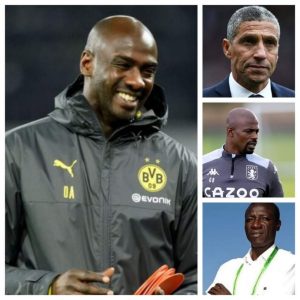 Otto Addo has always been the GFA’s main man for the job. While Mashud Didi Dramani of FC Nordstland in Denmark, who has lots of experience from his time in Europe as a head coach, and George Boateng of Aston Villa youth team as head coach, will be of great help to the national team. This could help see the black overcome Nigeria in March when the two countries host each other. Several concerns have been raised about why Ibrahim Tanko was not appointed after the Bavarian also applied for the coaching job. GFA has since not responded to that, but some sections of Ghanaians believe the latter was denied this opportunity due to his political color. Permanent appointments will be made after the double-header. Good move, I should say, but let’s see how things will turn out with their player call-ups.

MACCASIO SONG WITH STONEBWOUY WILL WIN NEXT VGMA RAGGAE/DANCEHALL SONG OF THE YEAR SAYS BLUEBEAT.