In a report slighted by nefgh.com The young promising footballer Masawudu faced his untimely death when he was shot in Libya. Masawudu has been in Libya with the hope to sign for a lower-tier side in the said country.

READ ALSO:  I Support Everyone Equally in The Entertainment Industry-Mohammed Hafiz(Mr Trender ). 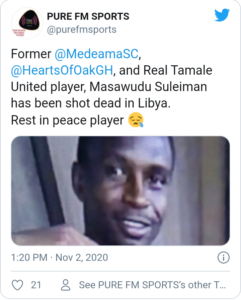 I Pay School Fees For Over 3700 Children – Tonto Dikeh.