Rivalry in music is common to find among artistes in order to determine who dominates and claims supremacy over the other.

This perceived feud between musicians dates back to the days of Biggie and Tupac, Obrafour and Lord Kenya and recent amongst them is Stonebwoy and Shatta Wale.

Fancy Gadam and Maccasio are two artistes who hail from the Northern Region of Ghana and there seem to be growing feud between their camps. Maccasio, in a recent celebrity interview with Amansan Krakye on Radio Central in Cape Coast was asked as to reasons for the constant feud with Fancy Gadam, he said

“On a personal level I don’t really have any issues with Fancy but it’s the normal battle between our followers to claim supremacy. He knows I’m the King and so he wants to dethrone me, however he would have to fight for my throne”. 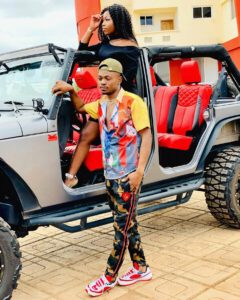 When Amansan Krakye asked Maccasio whether the seeming rumours of him killing the career of Fancy Gadam with black magic was true, he said

“Oh I can’t kill the career of Fancy Gadam. He is the only one who can kill his own career. As for me I have not used any charm or juju to bring him down”.

Sherif Abdul Majeed, known by his stage name Maccasio is from the Kingdom of Dagbon who raps and sings in his native language Dagbani with the ability to mix it with terms in English and Twi.

Kolee Movement & Deezy Entertainment signee,Lil Black is back again with yet another hot banger dubbed”God No Go Shame Us“.The danceable song comes shortly after his collabration with the 69 music king,Maccasio. READ ALSO:  Ghana […]

Maccasio – Story (Sarkodie-I will see what I can do cover)

Talented Ghanaian rapper, Maccasio exhibit some level of creativity on Sarkodie’s latest trending freestyle “I Will See What I Can Do” beat to serve us with this rap freestyle titled “Story”. READ ALSO:  Ghana Music […]

Tamale-based rapper Maccasio has given his account of what caused the feud between him and colleague Fancy Gadam, stressing that the singer is jealous of him. The two artistes who hail from the Northern region […]