Irasta and his brother Thug Omega now Amaru Case together formed a musical group called Faako Fame.
They came into the music industry with a lot of hit songs in the early 2000s but later went on their separate ways in the music industry.
Many entertainment pundits in the Northern part of Ghana raised a lot of eyebrows on what could have been the main reason for such decision taken by both talent brothers who was at that time the talk of media houses in the region.
The both played beautiful songs and even got more attention in this current generation of music industry as compare to their time.
The brothers are fully set to set the music industry ablaze again with their yet to release joint dubbed “Enermies “.
Many thought it was just another prank to get the attention of music lovers in the country but they prove those people wrong by officially unveiling the song flyer on their handles on social media.
The song will be out on the 25th December 2020 and will serve as a Christmas gift to all their loyal followers across the globe.
Check out the Official cover art below. 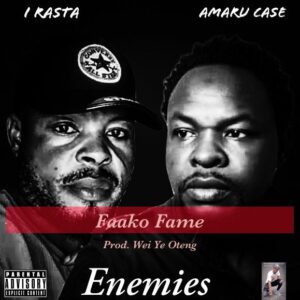 Thug Omega is out with another beautiful song fused with our traditional instruments entitled ”Sochira”. The latest masterpiece was produced by Peejeey. Download Listen & Share; Thug Omega(Aries)- Sochira(Prod by Peejeey) Downloads & Reactions: 1,561

Bitterflesh of Kaya Accused Thug Omega of Stealing their Song.

Kaya is a musical group based in the Northern part of Ghana which is made up of Ahmed Rockson and Bitter Flesh.The group was formed in the early 90s and was once on top of […]

Video : Double Tee detailed reasons behind his inability to hit hard on Bawlee.