Mohammed Ibrahim initially known as Lil K and now Gonga in the music industry has pen down a new managerial deal with JDI Entertainment.
The Suhupieli hitmaker made this known when he appeared on Time with Entertainers a facebook live program that is aired via the Northern Entertainment Filla .
Gonga was accompanied by his P.R.O. (who’s name was given us Friction ) who stated their label plans for signing the Suhupieli hit maker and also went on  to disclose that though they have just started but do hope and believe their label is gonna take Gonga to the BET. He believes Gonga has the talent and they also have the financial muscle and the needed connections to help pushed him to the top. 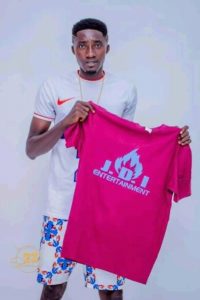 Lil K  stated that he has chosen music as his profession and devotes his time into it .This has become evident as he always try to bring up a concert that will not only benefit a section of the audience but he do makes sure he’s concept benefits all.
He further indicated that though he is the music headmaster in Ghana he still find mistakes in his own songs and others as well.

Batoro Movement & Gonga Movement Boss,Gonga is back again with yet another diss to the 69 music president, Maccasio and titled it “ZOGBELI POGBA”.The song was produced by Zebra Beatz. READ ALSO:  Freda Rhymz Officially […]

Gonga Movement Boss,Zamani De Gonga, who doubles as the Batoro Movement King is set to release another masterpiece. He intends for the general public to have another feel of talent exhibition,the yet to released new […]

I WILL NEVER PARTAKE IN ANY REALITY SHOW THAT FINDS IT DIFFICULT TO AWARD ITS PREVIOUS WINNERS – SAYS LIL BLACK.

BAWLEE UNVEILED COVER ART FOR NEW SONG WHICH FEATURES DON ZIGGY ON IT.