Burna Boy can’t seem to get off the news. This time, the African Giant is in the middle of a fan outrage, one which is sparked by a lack of professionalism that has typified Nigerian music concerts of late.

According to various comments on social media, Burna Boy got onstage, obviously ready to perform at the Born In Africa Festival (BAFEST) which was hosted by Access Bank. However, at some point, there was some technical issues with the sound, and Burna Boy waited on stage, performed a short freestyle with the audience, then angrily left the stage.

The artiste has since trended, with many bemoaning Burna Boy’s assumed pride and lack of respect for his fans. 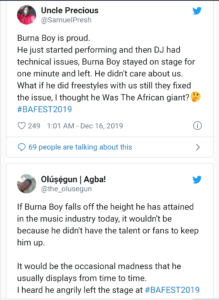 Another section of fans have defended Burna Boy, saying it wasn’t his fault the organizers put together a poorly planned show —other artistes like Tiwa Savage and Naira Marley was also in attendance.

READ ALSO:  MOST OF OUR PRESENTERS DEMAND S3X FROM FEMALE ARTIST IN ORDER TO PROMOTE THEM- AJ SUGAR REVEALED. 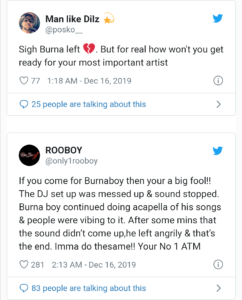 Nigerian singer Burna Boy has, on August 8, 2019, received an appreciation message from the Recording Academy – the organisers of prestigious Grammy Awards. The applause is coming after Burna Boy dropped his acclaimed studio […]

It is no news that 2019 has been an amazing year for Nigerian music star Burna Boy aka the African Giant. As the music star bagged numerous awards and got a Grammy nomination. A fan […]

Nigerian music sensation, Burna Boy has dished out another hot banging single titled, “Money Play” The self-acclaimed African giant and Grammy Awards Nominee wraps up the year with this new banger which is set to […]

Meet The Most Featured Female Model in Northern Ghana’s Music.

I NEVER HAD THE CHANCE TO LISTEN TO THE SONG I DID WITH GONGA BEFORE IT WAS RELEASED- MACCASIO REVEALS.