The defending champions, Algeria, have finally slipped to Equatorial Guinea.This means their 35- unbeaten match run in over 39 months has been broken just at the time when the Algerian people needed those three valuable points to help boost their round of 16 qualification in the Afcon.

Their last loss was in an AFCON qualifier away to Benin in October, 2018. Since then, they have been African champions and FIFA Arab Cup champions. Riyad Mahrez is their star man and he has been fantastic so far for them with chances created, but who to convert has been the real issue for them.

Their last group game will be against the elephants of Cote d’voire. Can they beat the elephants to seek qualification, if the maths and calculations really go well for them in other games, or will the lions of Sierra Leone push them into a difficult zone if they draw or win against Equ.Guinea in their final group games?

Algeria will try to leave tonight’s defeat behind when they get back to their hotel rooms, try to recover and get ready for their last and must-win final group game in the tournament if they want to boost their chances of progressing.
Who will qualify then for the third best spot if they beat Ivory Coast? All of these are big questions that have yet to be answered, except when the day comes.I love the hunger and high tempo of the football our African countries play in games, especially when they are playing each other as opponents or any European country. It means, with time, we can build strong teams to compete at the World Cup and can go on to win it in years to come.

Africa is fast learning to play football, especially in the North African countries and some West African countries like Nigeria.They are developing real talents and marketing them to the world through their local ranks of football and their premier leagues. Should Ghana do the same, we won’t be here fighting to win the Afcon in over 40 years. This is a good lesson that the Ghana Football Association should be learning from. 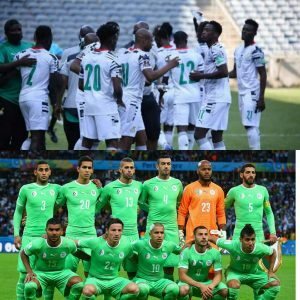 Don Ziggy – All Out