Aleewa Dagomba was one of the Sagani TV’s Chop the mic season 1 contestants who couldn’t make it to the finals but his hard work landed him a 2years managerial deal with Nobleman Entertainment
Which was terminated few weeks ago due to the management inability to fulfilled their agreement according to Aleewa Dagomba.
He made this revelation over the weekend during a live Facebook interview on Time with Entertainers with Nabi Yong Gh.
He further Stated that he will never and ever jump on any diss song even if his colleague artist diss him.

READ ALSO:  "I don't really support the release of albums at all because it is a waste of good songs"- Baron De Jarule revealed. 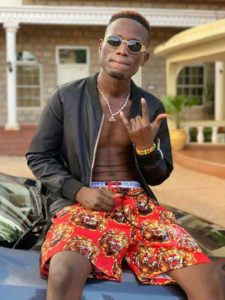 Aleewa Dagomba recently release a song entitled bye bye after the termination of his contract with his former management which many were of the believe that the song was going to be a diss song to his former Label but he rather prove us all wrong by dissing poverty.

Aleewa Dagomba is out with another inspirational song after he’s managerial contract with Nobleman Entertainment was terminated few weeks ago,The title for this latest song is “BYE BYE”.The song was Produced by White Money. READ […]

Nobleman Entertainment Kicks Aleewa Dagomba out of their Record Label.

Nobleman Entertainment is one of the most promising Record Labels the North can boast of. They are well established and have  people with deep knowledge in entertainment on their label.   They have on the […]

#EndSars: Emotional Video Of Nadia Buari Mourning All Who Died As A Result Of Police Brutality In Nigeria